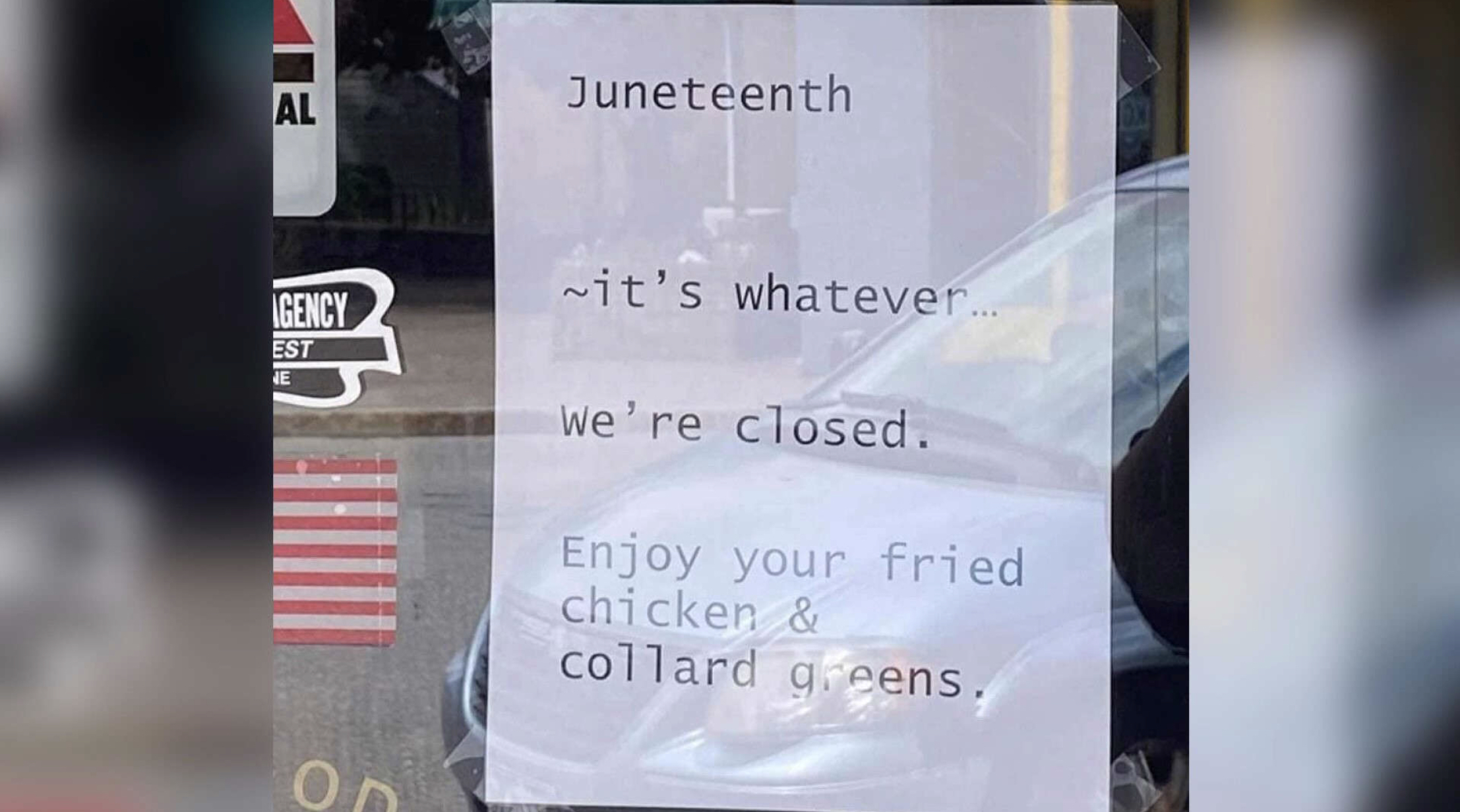 Juneteenth, a federal holiday commemorating the end of slavery in the United States, is celebrated by many in this country. However, in the small town of Millinocket, Maine, one company, Harry E. Reed Insurance, decided that this would be how they would commemorate the holiday. Unfortunately, they not only dismissed the holiday but also threw in a racist trope for good measure.

Melanie Higgins, one of the owners of the business and the person who posted the sign, wrote in a letter posted on Facebook, “I would like to apologize for any misunderstanding and hurt that has arisen out of my usual, snarky office closure signs and content. A sign that is being considered racist because of the terminology I used regarding foods that are associated with ethnicities. As well as my seemingly flippant tone. My only explanation I can offer is I had a death in my family and I just wanted to go home and I quickly wrote the note”

While I can empathize with the loss of a family member, the contents of the sign posted on the door can not be dismissed. In a town with less than 1% of African-Americans and coming from a self-proclaimed “multi-racial” person, I find it hard to believe that the content in this sign was just her “usual, snarky office closure” commentary. After reading some of the Google reviews the agency has received since they posted the sign, they agree.

This incident not only affected Harry E. Reed’s agency but other businesses in the area. The owners of the Millinocket Insurance agency were mixed up in the chaos simply because people were confusing them with the Reed agency. Additionally, other businesses in the area, like the local cafes and shopping sites, have noticed a steep decline in tourist traffic – as many no longer want to visit the town.

After the agency received national attention for the sign, Progressive and Allstate decided to terminate their relationship with the agency. Both firms announced they were dropping the agency from their roster because of the poster. However, spokespersons from both Progressive and Allstate issued statements bolstering their support for creating an inclusive environment “where our people feel welcomed, valued, and respected.”

Kudos to Allstate and Progressive for taking a stand to ensure the agencies that represent them embody those values and align with their company’s code of conduct. Whether you are a large brand or a small business, it is up to us to ensure we are creating inclusive environments in which we honor and respect every culture, including the vendors with which we choose to do business. A brand’s actions act as a floodlight that exposes it for who they are and what they value. Allstate and Progressive clearly illustrated this in their actions. So brands must look at the tape of their actions. What is it telling the world? But, more importantly, what is it telling you, as the business owner?

January 26, 2023
Manage Cookie Consent
This website uses cookies to improve your experience. We'll assume your ok with this, but you can opt-out if you wish.
Manage options Manage services Manage vendors Read more about these purposes
Preferences
{title} {title} {title}