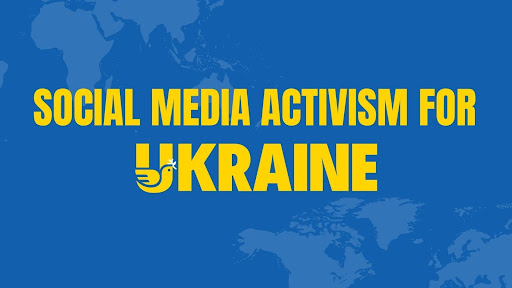 By this time we’re all more than well aware of Russia’s attack on Ukraine on Feb. 24th, 2022. If you’re looking for more info, check out our social media analytics report. But, what many people may not be aware of, is how people are using the power of social media and digital advertising to help Ukraine fight for its freedom.

As “The First TikTok War”, Ukrainians have been using TikTok to spread information, keep up morale and national pride, and give supporters guidance on how to help. (But, keep in mind there is also misinformation out there, too!) Even the Kremlin and The White House have tapped into TikTok influencers to spread and battle misinformation respectively.

When something so big and so horrible happens, it’s easy to feel helpless. If you’re looking for ways to support Ukraine, here are some ways you can join the activists of social media and digital advertising.

Anonymous, the vigilante hacker group, tweeted to inform their followers to find Russian restaurants and other businesses on Google maps to leave “reviews” as a way to communicate and share what is taking place in Ukraine. Censorship is a common issue in Russia, but one day after the Ukrainian invasion, the Russian government passed the strictest censorship law since Putin took power twenty-two years ago, as well as blocked numerous new sites.

Tiktok user @theminstem has dedicated their TikTok to translating Russian state coverage, showing the massive misinformation the government is pushing. A viral video they posted shows one of the main media outlets in Russia speaking against Russia with the knowledge in mind that those journalists will most likely be jailed. 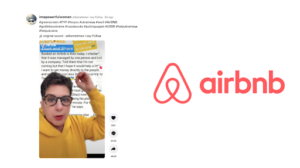 A viral TikTok by user @iampowerfulwoman is helping to spread the idea of supporting Ukrainians through Airbnb (who, by the way, has pulled out of Russia). Obviously, working and making an income is not a possibility for many Ukrainians, especially for those who rely on certain types of income. After booking an Airbnb, people are messaging the owners to let them know they will not be staying and asking for their rental to be given to Ukrainians in need.

Not only are TikTokers giving Ukrainians financial support, but also shelter. Between March 2nd and 3rd alone, over 61,000 rentals had been made. Airbnb is waiving all fees associated with these bookings and is offering free or steeply discounted prices in Poland for refugees (another location Tiktokers are urging people to book in for Ukrainians).

If you want to join in on this support, make sure to check who owns the rental to make sure it’s not an outside party or corporation. 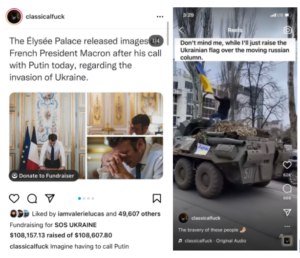 Memes aren’t just about the “LOLs” anymore. A fundraiser for Ukrainian refugees in Poland, organized by meme accounts @clasicalfuck and @zuccccccccccc, has raised over $100,000 so far. Other meme accounts have come together to support the charity. By using their influence as major meme accounts and meme marketing, they’ve been able to reach over five thousand donors so far. 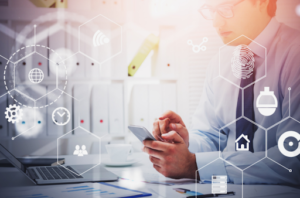 Putin’s chokehold on the media is keeping Russians dangerously in the dark. One British digital marketing specialist has come up with a creative way to use social media ads to work around this. Because online advertising is more difficult for Putin to control, Rob Blackie has gotten a team of volunteer digital campaign specialists to create ads sneaking in news about Ukraine that target Russia’s users. He’s currently fundraising for this project. 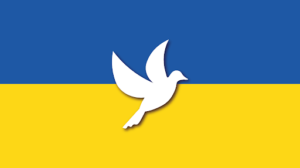 We at B3 Media Solutions stand with the people of Ukraine and are moved to see people in our industry of social media finding creative ways to give back and help.

May 5, 2022
Manage Cookie Consent
This website uses cookies to improve your experience. We'll assume your ok with this, but you can opt-out if you wish.
Manage options Manage services Manage vendors Read more about these purposes
Preferences
{title} {title} {title}