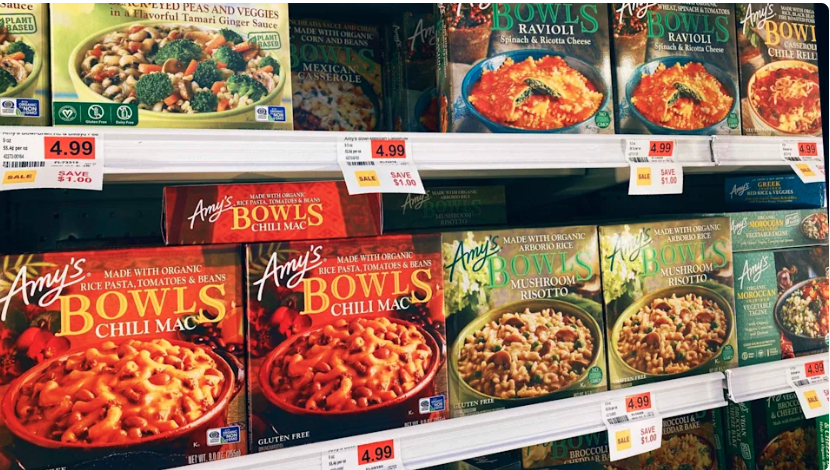 Recent news stories have been popping up around the beloved vegan and vegetarian food brand Amy’s Kitchen after a group of Amy’s Kitchen employees made allegations against their workplace due to safety concerns, low wages, and general mistreatment. NBC News first broke the story in January after interviewing several factory workers on the conditions and treatment they’ve received from the family-owned business. After the initial story broke, more employees have shared similar experiences online and several vegan organizations are calling on supporters to boycott the brand.

In the NBC News article, workers from the company’s Santa Rosa, California plant claimed that line speeds at the factory were sped up in an attempt to meet pandemic demand. Due to the heightened speeds, they say, employees were injured on the job. Workers also stated they were asked to work without accommodations for their injuries. However, due to the low wages paid to the factory workers, they were unable to afford expensive health insurance. Management even went as far as reassigning and eliminating the jobs of several injured workers, according to the article.

Amy’s Kitchen is still owned and operated by the founder, Andy and Rachel Berliner, who named it after their then-newborn daughter, Amy, in 1987. On its website, Amy’s Kitchen says that they “always cook our food with love.” However, some of their employees are not feeling the love. This is why labor union leaders and vegan activists held a press conference toward the end of February to discuss the allegations and formally call for a boycott of Amy’s Kitchen products.

Fast forward to last week, where the hashtag #boycottAmysKitchen trended on Twitter as more consumers began to find out about the unsafe and unfair practices at the food company, taking to Twitter to spread the word around the boycott.

Here’s the #BrandRewind moment – while the brand states that it has “completed a robust third-party audit to look at its safety record, disability program, and employee experience” and did not find that any of the allegations were “an accurate representation of our workplace” – where there is smoke, there is fire. Employees are not only looking to be treated equally but also fairly. Equality is not always the same as fairness. Equality is important but often leaves out factors that contribute to an employee’s role within the company. Being fair involves considering the entirety of circumstances and appropriately deciding next steps based on those circumstances. The picture the injured employees paint is an all too familiar one that many employers are guilty of and the pandemic has become the new scapegoat. It’s never too late to start enacting change that will help ensure employees are being treated both equally and fairly. Having an open, ongoing dialogue on how to improve company policies, including safety, and how leadership can deliver said policies appropriately can help businesses stay committed to being a welcoming, safe, equal, and fair place for everyone.

To Thine Own Brand Be True

November 4, 2020
Manage Cookie Consent
This website uses cookies to improve your experience. We'll assume your ok with this, but you can opt-out if you wish.
Manage options Manage services Manage vendors Read more about these purposes
Preferences
{title} {title} {title}